When I traveled to Haiti, there was one man I met there who really inspired me with his amazing story. His name is Webert Raymond. He has made a difference in Haiti by starting a school that now has over 700 kids attending. The school also happens to have the playground that I raised the money to build. 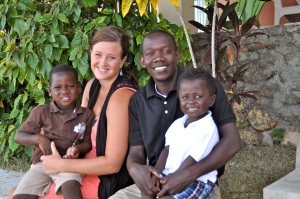 (This is a picture of Webert, along with his family.
Photo from the blog KaylaGrooters.com)

Every year at my school, the fifth- and sixth-graders have to memorize and say a four-minute speech on the year’s chosen topic. This year’s topic is: “someone who has overcome something.” Other kids are doing famous people like Helen Keller and Jackie Robinson. But I chose Webert.

This is the speech I wrote:

Imagine growing up in a tiny, two-room hut with dirt floors that houses the nine people in your family. On rainy nights, your bed could turn into a mud puddle because your bed IS the bare ground. Most nights, you fall asleep hungry, wondering whether or not you will eat the next day. Your father dies when you are three months old. Your grandpa is a voodoo priest. Your mother doesn’t go to church. But because you want to grow in your faith, you walk to church alone, at age SIX.

This is the story of Webert Raymond, living in Haiti, the poorest country in the Western Hemisphere.

Webert has overcome huge obstacles his entire life, and now at age 28, is doing what he can to help other Haitian children overcome the obstacles in their life.

If you know much about Haiti, you would know that the odds were stacked against Webert. You might think that Webert would be destined to a life of poverty and no education. This wasn’t the case for Webert, who overcame many obstacles to survive and to give back to his community. Webert was so grateful to be able to go to school as a child because the odds against Webert were huge. Only fifty percent of Haitians get a good education, more than half of Haitians live in extreme poverty, which means they make less than one U.S. dollar a day, and half the children under five in Haiti are malnourished.

Another lesson Webert learned was in ninth grade. His teacher had very nice shoes, and Webert was ashamed because he didn’t have nice shoes. His teacher told him that if he wanted to have nice shoes, he would need to work hard in school. Webert believed that in his heart. He worked hard, and graduated from high school. But instead of moving away to the big city of Port-au-Prince, where he could have achieved “success,” he felt called to stay in his tiny village and help other children get an education.

After Webert graduated, he opened a school in Simonette, his village. But the school was nothing like the schools where I live. It was a school made out of tarps and wood palettes. The school only had thirty kids. Anytime it rained, school would be canceled. Otherwise, the children would be doing their math homework in mud puddles! He knew that this was not an ideal situation for his students, and he would need help overcoming this huge obstacle toward educating the children of the village.

So he began to pray. For five years, he prayed and prayed. … And prayed … and prayed. He wrote letters to the owners of a large cement plant near the community, hoping they would help. But, all he heard was a big, fat… NO.

At first, nobody, not even his mother, believed that Webert could transform the poorly built, dirty school into a successful place. The obstacle was just too great. But still, Webert never gave up hope. He prayed. And prayed. … And prayed some more.

Then, his prayers were answered. In 2011, the Grooters family of Rock Rapids, Iowa, met Webert and created a mission organization called Touch of Hope to help him pay for and build a brand new school with cement walls and a daily meal for every child.

I have seen Webert’s obstacles and his life firsthand. Because recently, I traveled with my family to Haiti. I met Webert. I walked the streets he grew up on. I visited his old house. I saw his beautiful school on the mountaintop overlooking the tin huts and the ocean. I met Webert’s mother, who is a hard-working cook at the school. She now believes in God.

I saw what happened because of what Webert overcame.

Now, Webert’s school has over seven-hundred children and two large buildings. A third building is being built this spring. To reach these goals, Webert had to overcome poverty, doubts, and all of the odds against any person growing up in Haiti.

Webert’s favorite Bible verse is one that also goes along with his life. It is: “Jesus looked at them and said, ‘With man this is impossible, but with God, all things are possible.’ ” Matthew 19:26.

Oh, and he has some really nice shoes.

36 thoughts on “Webert Raymond: Living Out of The Ordinary”

This work is licensed under a Creative Commons Attribution 4.0 International License.